Ocho, at the Havana Inn, airily extends along the riverwalk. It’s a lovely bar/restaurant. Well-lighted via the large garage-style doors that line the wall that overlooks the Riverwalk. It was a bit of a mess in places last we were there (sugar packs propping up a table leg, crumbs on the long, velvety sectional) but that’s easily overlooked. In fact, just look up…

The piecemeal furniture has that down-on-its-luck sprezzatura feel to it, which I like. Not quite pretentious: more colonial Kenya somehow. I mean that in the best possible sense as San Antonio sometimes feels like a beleaguered, overrun city hosting tourists to survive. You have to find the more sincere places to drink when you’re downtown. This is one of them. 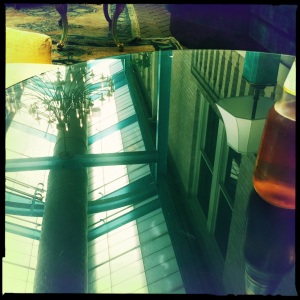 The first drink is free with your Artpace membership, which is nice considering that Modelos are $5. Still, as you can see from the photos below, the light is just so. 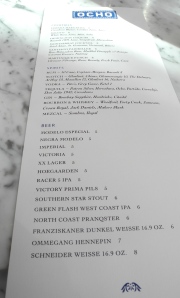 I’ve always loved this space and now it’s even better. Less linear with the couches and the bar at one end, Ocho feels like a place to relax, sip a beer and, wonderfully TVless, have a conversation about art (or football or whatever).While I couldn’t spend every afternoon here (the above mentioned price), the occasional Friday afternoon is perfect.

Rob Reiner’s iconic film, Stand By Me, was released twenty-five years ago, today.

It was only two months ago, I saw the film in its entirety for the first time.

I had seen portions of the film, heard countless references recounted by my peers, but it took a random Monday night in May to finally sit down and watch it. I think I was in the process of moving, and I conveniently suggested to my girlfriend that we should pop it in and procrastinate from the perils of packing.

Many portions of my childhood memories lack specifics, I can generalize events and moments, but I lack the ability to speak with certainty on what actually transpired. However, when it comes to the summer before seventh grade, when I was twelve years old,  it’s crystal clear.

Seventh grade marked the first year I entered public school. It came with dreaded public school fears like whether or not I would miss the bus, would I be able to memorize my locker combination, did seventh graders have to actually shower after physical education class, and did swirly-soliciting bullies stalk the hallways looking for the shortest kid in the class (that was me).

I distinctly remember the morning I walked out to the bus stop for my first day of seventh grade, off to a school absent the familiar faces I had gone to school with the previous seven years of my life.

I missed the bus.

In fact, my assigned bus stopped right in front of me, but I opted not to take it because its number didn’t match the bus number I was told to take. (Lesson # 1 of seventh grade: Don’t always trust the “experts,” particularly in matters of public transportation.)

After waiting 20 minutes, realizing bus #245 was never going to arrive, I walked home in tears. Terrified that all the fears I had rehearsed were going to become my reality.

I eventually got to school. Twenty-five minutes after the first bell had rung.

Looking back on it, arriving late erased the potential of having to stand around awkwardly for the first class to commence. Then again, the school year had 35 weeks and 4 days more to go. Bummer.

When it was time for lunch, I walked to the back of the cafeteria and pulled out my lunch. It was the first time in my schooling life I had to eat alone. I saw my classmates, who were basically strangers, catch up with the friends they hadn’t seen over the summer.

As an outsider, that’s the worst part about public school, the fact that many of my classmates had been schoolmates their entire life. There wasn’t necessarily an incentive to mingle with me, the new kid in the dorky outfit his mom picked out for him the night before.

It’s crazy to think that it’s been more than half a lifetime since I started seventh grade.

I’m not far from turning twenty-five, three months younger than Stand By Me.

At the movie’s close, the narrator played by Richard Dreyfuss, writes: “I never had any friends later on like the ones I had when I was twelve. Jesus, does anyone?”

Truthfully, I don’t recall sharing that bond with anyone when I was twelve. (Maybe it’s the only child in me that often found sanctuary in solitude.)

On the other hand, I vividly remember that awkward, nightmare first day of seventh grade.

Being twelve was scary, but I made it.

Freetail announces the second annual RealTail event on Saturday, August 27th starting at 11:30 am (nothing like that good strong pre-noon beer) at their brewery on 1604 and NW Military Hwy. They will be featuring a beer, which includes nopalitos, four spices and agave nectar, made in collaboration with Real Ale, as well as an assortment of other rare, barrel-aged beer including Freetail’s Bandito, La Muerta 2010, Atê and selections from Real Ale’s Mysterium Verum series. The list to taps will be rolled out on Freetail’s Facebook and web pages a week prior to the festival.

It’s a free event sure to hold a surprise or two.

From an official press release: Having previously announced expansion into the Houston market, Freetail Brewing Co. will announce the indefinite suspension of plans for a second location — citing concerns over access to capital.

“As I moved forward with the Freetail Houston project, I began to run into an increasing level of resistance in capital markets. A brewpub is a good project for downtown Houston, but the deal is simply not there for me at this time,” explained Freetail Founder & CEO, Scott Metzger. “When we announced the project on May 17, we also stated there were financial considerations to be addressed. Those considerations are ultimately what put this project on hold indefinitely, and no other reason. To move forward with the project at this time would beirresponsible and an injustice to my company and the City of Houston.”

“For now my focus will be to continue growing our successful original location, which has internal expansion needs of its own, and moving forward in the battle for fair reform of the Texas Alcoholic Beverage Code, as it relates to the activities of our state’s brewpubs and breweries,” added Metzger.

I must say that I was disappointed to hear that Freetail passed up a downtown San Antonio location for Houston. I love Freetail but it’s so far out it hardly even qualifies as being in San Antonio, as far as i’m concerned (I may be a bit of a snob as far as boundaries are concerned but it takes a planned day to make it out there). There are lots of places to be had in the flourishing  downtown/Southtown (and in focus for a repopulation of work/live space by our Mayor, including a redevelopment of HemisFair Park and recent whisperings of an HEB) area and moving down would keep the competition healthy.

Still I’m sorry to hear that they won’t be able to brew their divine suds in Houston. They would have done well there by adding to the half a dozen or so breweries. But in the meantime maybe they’ll reconsider a location downtown as they battle the stubborn forces that be over antiquated laws.

Unfortunately I didn’t realize that I was out of regular Tabasco. I did put some Tabasco Chipotle in my first miche. The smokey flavor was interesting, though I wouldn’t want more than just a taste. Too overpowering. We went to La Fiesta down on Flores for ingredients. A pleasant experience. Time seemed somehow to stop in the open, well-lit store. It was a pity to leave almost but we had miches to make. Worth it.

So from Blue Star* Ryan and I decided to head to greener pastures (or redder ones) up South Alamo. Rosario’s offers delicious margaritas, but I’d never had a michelada there.

*Just a note to say that I think Blue Star is an excellent place to drink beer. Their pale ale is refreshing and thoroughly delectable.

Near the boat dock under IH-35 at Newell & Camden a bachelor colony of Mexican Freetail bats hangs under the rumbling trucks and cars. (Yes, the females live in larger colonies elsewhere like the enormous colony under the Congress Street bridge in Austin.) Four Tuesdays in July and August (including the one tonight, 7/27 @ 8pm, 8/9 @ 7.30pm & 8/23 @ 7.30pm) San Antonio River Authority in partnership with Texas Parks and Wildlife give an educational presentations prior to the emerging of the bats for their nightly feast.

The colony, according to Maura from SARA, is somewhere around 10,000 bats. They roost here in South Texas from about April to October then migrate to warmer climes down south. Of the 47 species of bats in the US, Texas is home to 32 of them. Unfortunately, though, bats in the US are being smitten with White-Nose Syndrome, a white fungus that is killing thousands of them.Luckily it is not yet in Texas, but there have been cases of it as close as Oklahoma. This is scary stuff.

The bats came out at 8:25 pm and streamed up over the highway for about five minutes or so. It’s a much smaller  showing than Austin’s but no less spectacular. There’s something magical about seeing the ribbon coming out from under the highway and disappearing around the phone tower. The ancient echolocation of bats against the cellular sky. 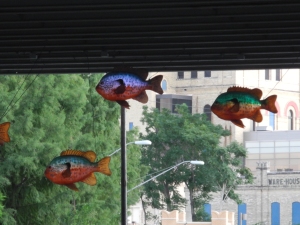 View from the boat dock when you're not looking at the bats.

As we rolled into the Blue Star Arts Complex, Lyle commented that the sidewalks along S. Alamo are going to be expanded in order to meet the needs of a large pedestrian population. Being that it was 2:30 on a Monday afternoon, pedestrians were nowhere to be seen and parking was ample. Approximately 8 – 10 people dined on a late lunch, while the bar remained unpopulated. We took a seat and ordered a Blue Star Michelada.

I’m assuming the impending renovations will increase foot traffic to-and-from the Blue Star Arts Complex. That being said, I can guarantee no one’s going to be running to the Blue Star Brewing Company for a michelada.