The Steer. The name conjures up some kind of beefcake club, but the actual bar, from the outside, calls to mind a strip club, all windowless cinder block and wood. The door, while itself a pretty standard sturdy bar door, is framed by the rust-colored wood presenting a strangely stately illusion, especially when coupled with the gas-lamp lighting fixture above it. The used car lot next door puts the finishing touch on the eclectic site. Ryan and I got our collective nerve up and walked into the dim bar at 735 SW Military. 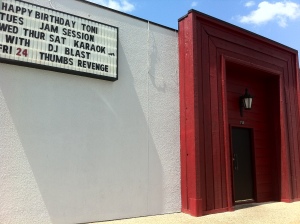 The thing with windowless bars is that, paradoxically, you never know what they’ll look like inside but somehow the interiors are always the same. It’s the possibility of something absolutely insane that’s vaguely unsettling but exciting. But since reviewing The Red Baron, another bizarrely square bar on Burr Road, I’ve had a suspicion that they all have one of those horseshoe shaped sunken bars at which you sit in regular height chairs. After moving around the L-shaped foyer, another staple of such bars — it keeps the bulk of the sunlight from flashing the customers — we took in the bar in all its immediate glory: bar and down a step two pool tables. And, yes, the bar is in fact sunken and three-sided (I’m batting a thousand). Mirrors barely reflected anything in the dimness particularly the diagonal swaths of mirror between the rustic wood in the corner where the tiny linoleum dance floor/stage clung to the floor.

The jolly woman bartender bounded up and asked for our IDs immediately, which was particularly odd considering the kid, eight or nine, wandering around inside the cool, quiet darkness. Whatever: he wasn’t drinking and sat quietly in the corner. We ordered a couple of Coronas and found out that the domestics went from $2.25 to $1.75 at four o’clock and that Kamikazes were on special at $3 (there was also an Apple Bootlegger, or something like that, up on the board for $1.50). The Coronas were $3 a pop. Ah, the cool vaguely beery taste of Mexico’s most famous beer.

We quickly made our way over to the pool tables for a couple of 75¢ games. We won’t dwell on the results, but rest assured that they were fairly one-sided. Then back to the bar and another round. On the TVs: Maury and Dr. Phil. Mercifully (that couldn’t possibly be the word) the sound was only on the TV showing Maury. The smattering of happy bar flies gabbed and made remarks about baby daddies and DNA (well, mostly baby daddies). Another round. Ryan and I listened in to bits and pieces of conversations, made our own witty banter.

It was so dark and cool in the bar that soon the hundred degree weather and blinding sunlight were distant memories. I can’t say that it’s a particularly pleasant feeling really. I love San Antonio because of the sun. I need my vitamin D. Give me a bright, airy bar any day of the week and I’m a happy bar fly myself. Still there is that subset of the bar fly group that thrives off the time-warping, temperature-thwarting necessity of cave dwelling forgetfulness. Unfortunately this same subset tends to also include lots of smokers. I’m pretty sure a Venn Diagram would show eclipsing circles. Needless to say my clothes reeked. That’s always a strike (or two) in my book.

Finally we staggered out, not from the drink but from the horrible nineties country pop which had suddenly accosted us, and then reeled from the combo punch of light and heat. The other drawback to these bars is that you have to emerge sometime (probably better to wait until darkness) thus compounding the sense of guilt at having been in such a place, which is ironically and cyclically assuaged by having been in such a place…

We blinked a few times to get our bearings and then we were gone, the little box disappearing into the clutter of SW Military Hwy.